Left the house and rode on the Georgetown Branch to Brookville Road.  At the top of Brookville turned left onto Seminary Road down the hill over the Beltway and turned right onto Forest Glen road.  This took me out of the way by around ½ mile and added a down and up hill leg that could have been avoided.  If I want to take Forest Glen it would have made more sense to get onto it from Newcastle Road by the Pagoda.   Followed Forest Glen past Georgia Ave and Down the hill to Sligo Creek Road.  Turned left on Sligo Creek Road and Followed it up to Dennis.  Sligo Creek only has a narrow shoulder so it wasn’t easy for cars to get past me and I wasn’t going fast enough for them since it was slightly uphill.

Drove up Dennis without any problem and followed my usual route down to Edgewood and over Southwood to 29.  The ride down 29 wasn’t any worse than usual given that I was going downhill at speed.   Right onto Lockwood and then up that hill without any problems.  I took the left behind White Oak and followed around to Old Columbia Pike.  I decided to try crossing Paint Branch on 29 rather than Old Columbia Pike since I knew that there was a chance of not being able to get through Old Columbia’s bridge.

The shoulder on 29 was nice and wide going down the hill but then as I started up the hill I saw ahead that the shoulder was going to get narrow.  So I signaled and tried to start moving over to the lane but the cars were pretty thick so I stayed on the shoulder until all the cars cleared and then all that was left was a Semi Truck.  I signaled again and started moving over but he was staying in the lane.  Finally at the last minute he moved over to let me have some of the lane and honked at me as he passed.  No fun!

The ride onto Industrial is very bumpy and Tech Road also has a lot of pot holes so I wasn’t able to go very fast there either.

Arriving at work
As I drove into the parking lot I realized that the pedestal we had talked about parking on was blocked so I couldn’t just pull in  I turned around and rode over to see if I could pull the ELF up onto the patio under the pergola but there isn’t a ramp there so I looped back over to the end of the driveway.  At that point Cindy, Brian, and Beverly came out the back door and were happy to see me.  Then I noticed Noreen was taking pictures from the second floor windows and she started texting me that my turn signal was on and it was driving Michele crazy.   With some discussion we agreed that the best location to park the ELF is in the last parking space.  I might park near one of the light poles and get a long cable to secure it in the future.  But in the meantime I just locked it to itself with the Kryptonite lock. 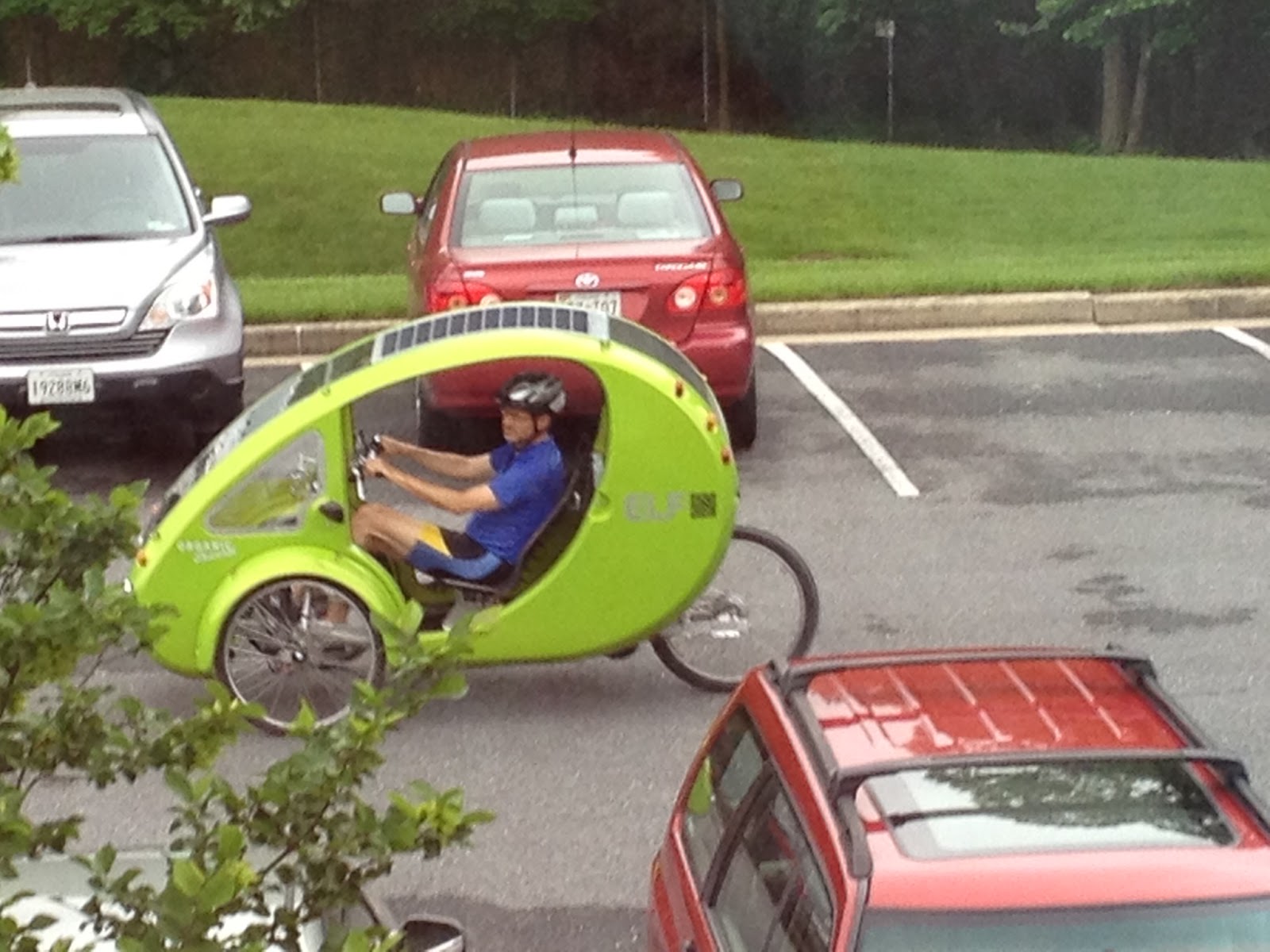 Once I unloaded I realized that it was a lot to carry.  Two big saddle bags plus the battery in a canvas bag, and water bottle.   I walked up the stairs with all this and arrived in my office a bit exhausted and overwhelmed.

After showering and having some lunch I decided to drive the ELF over to the MVA to get the paperwork finalized.  I printed up my insurance info and faxed it back to them.  I was wearing my work clothes with a pant leg protector. When I got to the MVA I found parking in a motorcycle space (just the right size!) and locked the back wheel to itself with the kryptonite lock.   Turned off the power switch and left the ELF in the sun to charge the battery.  A police woman and man came over to ask about the ELF and wondered what it was classified as.  Several others looked interested and one asked about it as I walked into the MVA.

When I got into the MVA I was not thinking very straight (and really was convinced it would take a long time) so I got into the information line which turned out to be the wrong information line.  After about ten minutes the information man sent me to the second information line which was much longer.  I waited in that one for about 15 or 20 minutes.  The woman at the desk said I could get my license online but when I asked about getting a temporary tag she gave me a number and motioned me to the waiting area that was completely full of others waiting for help.  Luckily I found a seat and was able to catch up on some rest and reading while I waited the 1 and ½ hours for my turn.  When my number finally came up the woman taking care of me said she was going to need some help from her supervisor who was walking by at that moment.  The supervisor came right  away and said that I could have done the transaction online.  Then she used the website and had me type my information into the forms.  After paying the $240 excise tax and the $25 title and license I was on my way.  The sticker will be coming in the mail.  However, I wasted a good 2 hours since I could have done the whole thing online.  At least I got a bit of a nap in the waiting room.

The ride home
Since I got to the office so late and spent most of the day at the MVA, I decided to wait to leave until after rush hour would be mostly over, around 6:30.  I suited up and carried the 2 saddlebags, canvas bag with the battery and charger, and the water bottle back down the stairs and outside to the ELF.  After loading everything up and unlocking I decided to go ahead and apply the two extra mirrors which only took a minute.  Then I was on my way.  When I got to the road Gene pulled up next to me in the Suburu and asked me to try going full speed so he could clock me.  I was able to get it up to about 22 but the road is pretty bumpy so I didn’t pedal very hard.

I turned left onto Industrial and then left onto Old Columbia Pike.  A couple of cars passed me before I started down the big hill.  As I reached the bottom of the hill I could see that the barriers were going to block my way.  In fact they were almost completely across the opening.  I decided it was worth it to avoid 29 so I got out and lifted the elf over the curb and onto the grass to get around the barrier.  Then I rolled down to the bridge and across the bridge.  When I got to the other side it looked like I might just be able to get through the second barrier.  However, as I pulled up it became clear that it was just a few inches too narrow.  I got out of the ELF and played with the barrier a bit and noticed that one side was uncurled more then the other side and that side has some flex.  With a push I was able to bend it enough to get the ELF through but I came close to damaging the fender and wheel on the left side.

Finally free of the barriers I made my way under power up the steep hill and past the stop signs along Old Columbia Pike.  I turned left behind White Oak and took the access road to avoid Lockwood until the very end.  Then I pulled onto Lockwood and waited in the traffic lane for the light at New Hampshire Ave.   When the light changed I had no problem keeping up with traffic down the hill on Lockwood and then turned left onto the sidewalk at the bottom of the hill.  I wasn’t in any mood after the morning incident to try to ride on 29 up the hill in traffic.  The sidewalk wasn’t bad and I only encountered a few pedestrians who had to step off the sidewalk to let me through.  I tooled up the hill on the sidewalk and was feeling pretty good about the result.  But, alas, when I got to the top of the hill I saw that the last power pole is right in the middle of the sidewalk and I wasn’t going to be able to get around it without going onto the road.  So I sat there until the light changed and then drove over the curb and rode with one wheel on the sidewalk and the other wheel on the road until I got to the crosswalk.  Then I turned and crossed the street and drove to the other side where I waited for the light to change.  Then I drove up Southwood to Edgewood and down to Dennis without any problem.  I rode on Dennis over University and down the hill, slowing to let the cars pass before taking the lane.

I turned left onto Sligo Creek Trail and took it very slowly as there were a good number of runners and walkers about.  I crossed Forest Glen without problem and rode over Flora Lane to the trail.   The ELF did fine on the little trail connecting Flora to Columbia, until the end when I had to put one wheel on the ground and the other on the path.  When I got to Dale Drive the traffic wasn’t bad and I was able to pull up in the lane behind a car.  Then I tooled over Georgia Avenue and turned left onto Brookville Road.  There were some cars behind me but I was going pretty fast so they didn’t seem to mind me.

I got onto the Georgetown Branch at the usual second entrance and rode along quite easily.  I had to slow down a bunch of times on the trail and ring the bell to make sure people knew I was coming past.  But nobody seemed too annoyed with the big bike on the trail and I even got a wave from a recumbent bike rider.  When I got to Connecticut I waited for the light and then crossed to the little road in front of the cleaners.  The rest of the trail ride wasn’t bad but I had to go slow since there were a lot of runners and a few bikers.

The ELF did fine going up the ramp into our neighborhood even though some of the root vines are huge.

The good news is that the battery didn’t seem to have any problem with the distance.  The brakes seem to be in need of some adjustment since they are squeaking and vibrating and there is a bit of a pull to the left.   I also need to confirm that the front wheels are still in alignment after having them fall off the path and riding in un-ideal situations.   The potholes bounced things around a lot and the saddlebag on the right eroded the rubber on top of the storage shelf.   But everything survived the trip (including this macbook pro).

The two big problems to solve are both on Route 29.   So I’m considering staying on Sligo Creek Trail up to Kemp Mill.  I think I could also stay on 29 for the ride up Lockwood and turn right on Northwest Drive to avoid Old Columbia by riding on Perimeter Road, Left on FDA Blvd, Left onto Cherry Hill Road to Palm Orchard Drive and back on Broadbirch.

Tomorrow is another day…
Posted by Java Dude at 9:55 PM