Here's an unusual parking job.  It's a regular parking spot but I pulled the back wheel onto the curb so that the cable lock can reach the barrier. 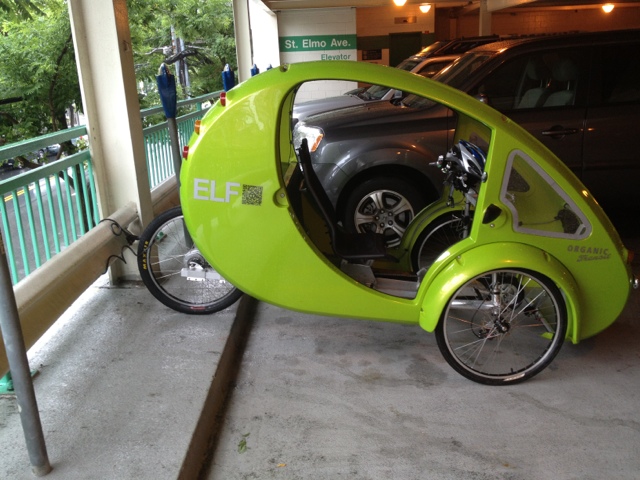 It's been raining almost every day the last few weeks here in Maryland so I finally decided to drill some holes in the rear battery compartment to keep it from filling with water.  It was just in time since I took the ELF down to the Smithsonian Folklife Festival this morning.  It was looking like rain before I left and sure enough before I arrived at my destination it was pouring down rain.  At the end of the day, the battery compartment was empty of water, but it did pick up some sand from driving around on the Mall. 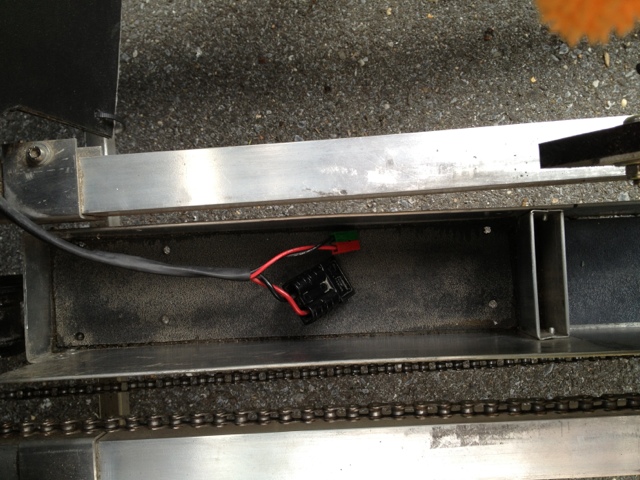 Here's the ELF with a bit of the Washington Monument, wrapped in it's scaffolding, visible on the left top of the picture.  As usual, the ELF drew a crowd.
I decided to drive down to the Mall using the Capital Crescent Trail.  Usually the trail has a lot of joggers and bikers and it's just wide enough for two ELFs to pass each other.  The busiest part is between Bethesda Ave. and Little Falls Parkway, so I drove the ELF across Battery Lane and down Glenbrook to Little Falls Parkway to avoid that section.  The ride downtown on the trail went quite smoothly.  There were a good many bikers and joggers but the threat of rain probably reduced the numbers considerably.  The ride downtown is almost all downhill so I hardly used the motor at all.  I was also saving the battery for the ride home.   It was starting to rain lightly just as I was arriving in Georgetown along Canal Street and began raining steadily as I emerged onto Rock Creek Parkway.  I used Google Maps to direct me to the Smithsonian via Constitution Ave.  The ELF kept up with traffic quite well along the several miles ride in the driving rain.  I was probably going about 20 along the route and the roads were quite smooth and two lanes allowed faster cars to pass.  At one point a moped rider passed me in the rain and he was clearly getting a lot wetter than I was. 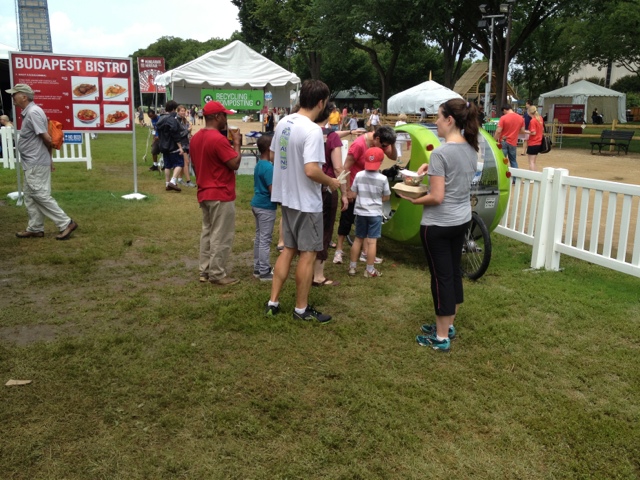 I've noticed that the ELF windshield does a very good job of staying clear of water.  The reason?  It pitched extremely steep so the water just rolls down the front.  The back window is a different story.  As you can see from this picture, the back window is getting a lot of spray from the back wheel.  I wonder if there is any way to install a rear fender.  I no longer have an overhead rear view mirror so it's not really a requirement to see out the back window.  But it does get messy and I have to clean off the dirt and sand from the trail pretty regularly. 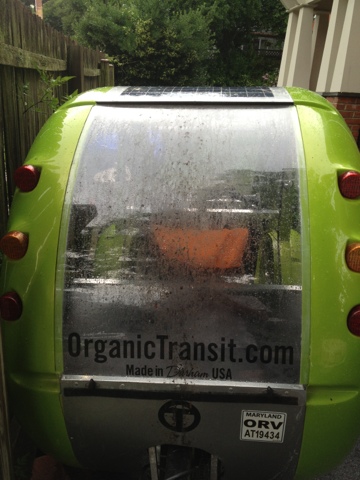 The ride home after the concert was really interesting.  The sun had come out so I figured the Capital Crescent would be packed and decided to take Rock Creek Parkway instead.  Once again, the ELF did a great job keeping up with traffic in the city as I drove along Constitution Avenue and followed the signs for Rock Creek, under the Kennedy Center, and past the canal.  I was going between 20 and 25 mph the entire way along that route and then drove up Rock Creek Parkway past the exit for Mass Ave. and past the Zoo all the way up to where the road is closed for cars.   The road was quite smooth and the twists and turns were really fun in the ELF.  At one point I misread the signs at the intersection of Piney Branch so went an extra mile looping up and back to Rock Creek.   Back on track I played tag with a recumbent bike as I was pedaling on the flat road to preserve battery (and get a little more exercise) and then passed him going up the big hill.  It was a great ride home and it didn't even rain any more.

When I got home I decided to take advantage of the sun to start recharging the battery.  After less than an hour it started looking like rain again so I brought the battery in to charge.   It was about 2:30.  Then something really surprising happened.  The charger was still going until about 8:30.  So, it took 6 hours to recharge the battery!  I knew that I had used the battery a lot this morning, but usually it takes about 2.5 hours to charge.  Maybe this is how long it takes to charge a dead battery.
Posted by Java Dude at 10:40 PM